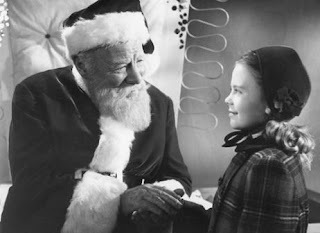 I watched the 1947 version of "Miracle on 34th Street" last night. Hadn't seen it since the year our boys had their moment of doubt about Santa. After watching the film that Christmas, Santa had a one year reprieve in the Long house.

But I guess I was so focused on my sons' existential moment that I failed to notice something else. Who are the bad guys in the movie? They are legion and led by the forces of creeping consumerism as portrayed by the Macy's toy department manager. Then there are the agents of cynical, populist politics represented by the judge in the Trial of Santa Claus. I was most sensitive to two other villains that grabbed my attention: the psychologist and the "progressive school" the little girl, Susan, attends.

The psychologist is a wreck, a wretched little man who, because his own life is a wreck, crusades against the Macy's Santa, our hero, who is either (a)The Real Deal or (b)a harmless delusional saint.

In one scene, The Psychologist lectures the children and parents of Susan's school about the myth of Santa and why it is bad to fool children. This echoes Susan's mother who takes great pains to demystify life for her so that she will not be disappointed when she learns that myths are untrue. The heart of the movie is Susan's conversion from Santa Skeptic to True Believer. Yes, Virginia, there is a Santa Claus.

The Psychologist and the Progressive School (read non-traditional) are demonized. They are the unknown; the different; the new and strange and disruptive.

Back in 1947 and still today the Fear Mongers enlist Santa Claus to battle the forces of change, to protect anything and everything dubbed "tradtional", and to protest any idea labeled "progressive". We've always done it that way.

On this topic we could go as deep as the salt mines under Cleveland (did you know that Cleveland used to be the sea bottom?), or as far afield as the once open grasslands of the American plains (..."where the buffalo roam and the skies are not cloudy all day."). Instead let me say this:

I like Santa Claus. I loved my sons' love of Santa and their faith in the essential goodness of the universe that he embodies.

Look at the history of Santa Claus and the history of Christmas itself to understand how thin a veneer "tradition" represents. The history is much richer, more nuanced and controversial than most of us understand.

My cat is afraid of change. You should have seen her the day the Christmas tree went up: sniffing the tree, sniffing the light cord, her tail straight up in the air, twitching.

People are afraid of change, too. But without change we'd still be living in caves. Beware the fear mongers. They want to keep you in your cave.

Yes, there are other approaches to education. If you were happy with your own education and think that approach was good enough for your children and will prepare them for life in 2025, fine. Enroll them in a school just like you went to. An old fashioned school.

If not, if you think there must be a better approach, look for an alternative. Just don't get Santa involved. He's got no dog in this hunt.
Posted by john long at 6:20 PM No comments:

As peaceful as it looks 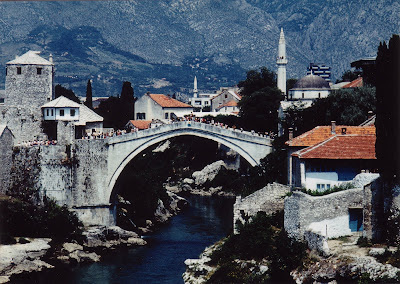 Here's an e-mail exchange I had this morning with Post Oak School parent Stephan Kinsella:

Stephan,
I love hearing about the conversations you have with Ethan. I also continue to be amazed by the depth of thinking children display. Most adults don’t give them enough credit. That’s why Montessori said that children are our only hope for peace.
John

The earth is not as peaceful as it looks
via StephanKinsella.com by Stephan Kinsella on 12/18/09


I was driving my 6 year old to school this morning. We somehow got into a conversation about how laws were made. I started explaining to him the distinction between law formed by courts, and law artificially made by legislation. This led into a brief explanation of the British system, the role of the king or queen and parliament, how parliament is bicameral, and Britain’s “unwritten” constitution, and to a contrast with our own system with a President instead of king, a bicameral congress, and a written constitution. And so on.

During this Ethan blurts out, “I wish they would make a law against war.” So, this led to a discussion of the United Nations and treaties, and the attempt to limit warmaking in the UN charter. He asked me if it worked. I told him it hasn’t worked very well. He says, why? I say, well, if you are a powerful nation then you are sometimes tempted to use that power to get your way, and so on. So we still have wars.

Ethan is silent for a minute, and then mutters, “The earth is not as peaceful as it looks.” It kind of creeped me out.
Posted by john long at 10:37 AM 2 comments:

"Imagine a world in which every single person on the planet has free access to the sum of all human knowledge."— Jimmy Wales, Founder of Wikipedia

Mark Berger, friend and colleague, Head of School at Corvallis Montessori School, passed this along. I'll paraphrase what he said: Jimmy Wales is a Montessori grad. We brag about his work and the impact Wikipedia has had on the culture. He is an exemplar of the inventive, iconoclastic, entrepeneurial spirit engendered by Montessori education. Here's our chance to support a Montessori endeavor.
Posted by john long at 10:15 AM 2 comments:

General Douglas MacArthur's Mom, Pinky, moved with him to West Point and took an apartment near campus so she could watch him with a telescope...

In "The Backlash Against Over-Parenting"
Time magazine takes on

and fear of failure.


Mistakes are good...
so is boredom...
and so are fewer toys.

(Thanks, Stephan, for sending me this article!)
Posted by john long at 11:13 AM No comments: