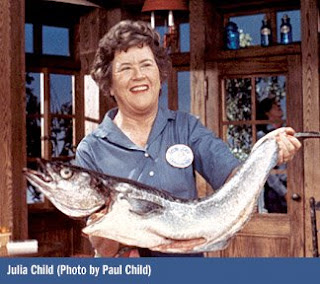 I'm going to see the new movie about Julia Child because ... she was such a character (I remember watching her on tv cooking with a blow torch!)...and I truly admire Meryl Streep (who plays Child in the movie)...and I love to eat...and I love what changes she provoked in the American diet since my boyhood days when canned chop suey was considered adventuresome (at least in my family)...and because she was a Montessori child.

That's right, Julia Child attended Montessori school and credits that education (in her book Julia Child and Company)for her love of working with her hands.

Actually, I see much more Montessori than that in Mrs. Child.

Several Houston chefs were interviewed about Julia Child for a story in today's Houston Chronicle.

Michael Cordua (chef and owner of Cordua Restaurants) said, "Julia was a role model to me in that she broke away from the homogenization of the American diet in the '50's--white bread, canned veggies, etc. She was a pioneer in taking an ethnic cuisine center stage and paved the way for the rest of us to express our culinary heritage to mainstream America."

A pioneer. Montessori kids have the courage and the creativity to be pioneers. How about Montessori kid Jimmy Wales who invented Wikipedia? He reinvented the old fashioned book-based encyclopedia written by experts and revised every couple of years. Everyone said everyone can't collectively write an encyclopedia. It will be worthless...

Ryan Hildebrand (executive chef at Bistro Don Camillo and Bistro Provence) said, "I remember watching her show with my mom. Her character added a sense of fun to cooking, which generated an interest in me. She made an omelet look fun. It didn't look like work. She showed you could spend your day in the kitchen and it was a fun and happy place to be. She put a happy spin on what can be a very taxing career."

A sense of fun. It didn't look like work. When a group of parents and teachers sat down together to describe Post Oak graduates, one of the characteristics was, "They are fun to be around. Their enthusiasm, civility, and respect for others are contagious."

Stacy Crowe-Simonson (executive chef and owner of Chez Nous) said, "Her history of going into the kitchen so blind and becoming such a master of it definitely gives women an inspiration. It did for me....She takes the fear out of trying something new."

Montessori wanted kids to develop "a friendly relationship to error,"--to understand that mistakes are a normal part of learning, and that to learn, you must be willing to make mistakes, and then to move forward. Unfortunately, traditional schools are more concerned with knowing than with learning. And when that is your concern, mistakes are an embarrassment, a red mark on the page, a poor grade on the report card. And the result is resentment, shame and fear--rather than encouragement to accept mistakes as the price of admission to the steep part of the learning curve.

Robert Del Grande (chef/owner of RDG + Bar Annie) said, "Julia was the same person on TV or in front of a group or having coffee with her. There wasn't a stage persona. If you were talking to her one on one, it was the same as if she were on a TV show. She had no pretense at all. She was completely genuine."

Del Grande's observations echo loud and clear another characteristic our parents and faculty observed in Montessori grads: "They are comfortable in their own skin. Post Oak grads have grown up in a nurturing culture that encourages self-motivation, independent thinking, and the experience of taking on big challenges—all great preparation for whatever life has in store for them."

Popcorn anyone?
Posted by john long at 11:28 AM