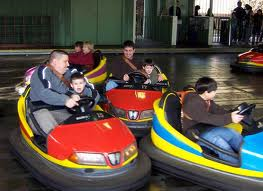 Today's a good example.
Larry Ferlazzo says teachers are experiencing innovation fatigue.  He quotes a school principal who says, "I'm sure self-initiation, problem-solving, risk-taking and the freedom to fail and learn from such failure will be a part of the conversation.  As a principal, I would love to have some strategies to close this gap."

Education Week reports that Emily Smith, an elementary school teacher in Austin, Texas has redesigned her classroom and her teaching. She wants to spark creative thinking in her students.  This is the heroic effort of a single teacher.  She is not following the expected patterns.  She will encounter the resistance of her peer teachers; she will encounter the resistance of her administrator. Never underestimate the power of cultural entropy.  Schools are highly resistant to change.

Where can you find schools with environments and teaching style that actively promote self-initiation, problem-solving, risk-taking and the freedom to fail and learn from such failure -- and where teachers do not experience innovation fatigue, but support each other in this work?

Tony Wagner is the Innovation Education Fellow at Harvard's Center for Technology and Entreprenuership.  His book Creating Innovators points to Montesori education.

Here's an exerpt:
"What do you suppose the founders of Google, Larry Page and Sergey Brin; Amazon's founder and CEO, Jeff Bezos; Wikipedia founder Jimmy Wales; Julia Child; and rapper Sean "P. Diddy" Combs all have in common? Gregersen's research, cited earlier, uncovered an extraordinary commonality among some of the most innovative individuals: they all went to Montessori schools, where they learned through play. The research about the importance of play in children's development spans many decades. In the 20th century, Maria Montessori, Lev Vygotsky, Jean Piaget, and others did groundbreaking research on the ways in which children learn through play. Montessori integrated her understanding of the importance of play into her curriculum for schools. Today, Montessori schools can be found around the world."